Which States Have the Most Neighborhood Watch Programs

Home » Which States Have the Most Neighborhood Watch Programs?

Community watch programs have their roots in America’s colonial days. The Town Watch was a way for neighbors to alert the authorities—often a lone night guard—about suspicious activities in their village. Over time, the concept has grown and adapted into the modern neighborhood crime watch. The idea is simple: communities look out for one another by keeping an eye open for potential criminal acts and reporting them to the local police.

But how many communities actually have organized Neighborhood Watch Programs? VivintSource.com Analysts put their heads together to discover which states have the most Watch Programs per capita. Here’s what we found. 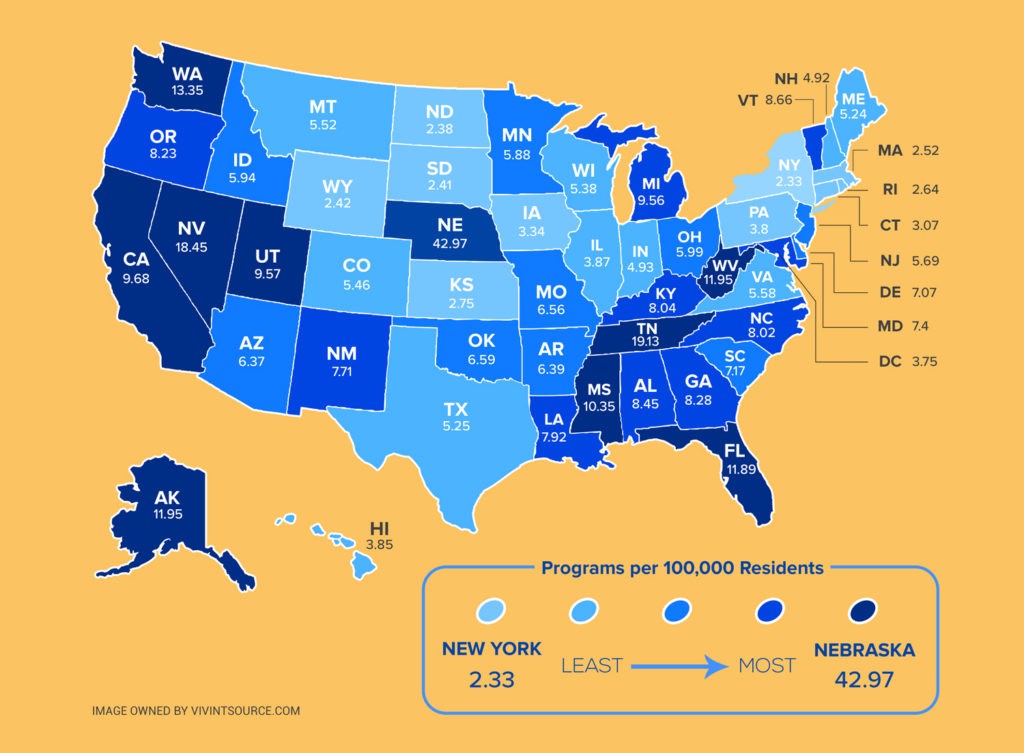 Though there seems to be a significant gap between the states with the highest and lowest average number of programs—Nebraska and New York respectively—these numbers don’t always correlate with community safety. A deeper look at the numbers exposes the efficacy of Neighborhood Watch Programs:

Neighborhood Watches—Just One Part of the Puzzle

As part of the overall solution to lower crime, Neighborhood Watch Programs are only as productive as the attentiveness of their communities. The good news is that the modern Town Watch is evolving. Apps like Vivint Streety combine a network of security cameras throughout a community and shares the footage in real-time to all users who participate. Community variables such as police presence, the number of homes with reliable security systems, and the close-knit aspects of a neighborhood also play a part in crime reduction.

We gathered the listings of all 28,238 Neighborhood Watch Programs listed on nnw.org. Any programs that were duplicates of each other, not in the US, or missing addresses or states were removed. This left us with 24,212 programs. We ranked each state and the District of Columbia on how many registered watch programs they had per 100,000 residents.

What should I look for when buying a security system?

What’s the Difference Between Surveillance Cameras and Security Cameras?